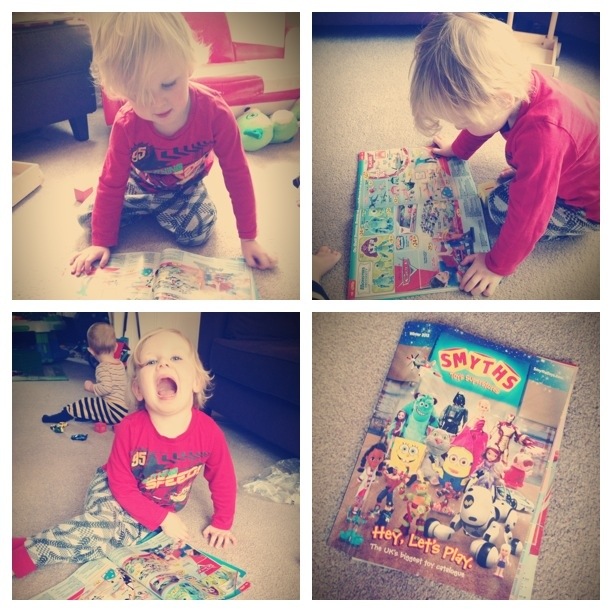 I should have known banging on about staying on the good list from mid November was an error. It’s still a month away and for a three year old that’s a lifetime. Still, Christmas is all about the anticipation and anticipate it he does.

One of the best bits of Christmas for me as a kid was perusing the Argos catalogue with my sisters and ripping out all the things we wanted. We’d stick them in our letters to Father Christmas before burning them in the open fire, the smoke signals sent the Argos code numbers off to the north pole apparently – clever stuff.

Anyway I ordered the Smyth’s toy catalogue for his nibs (because I am an idiot) so he could do the same. Since it arrived a few days ago he had pored over his ‘toy book’ constantly. The commentary goes a little something like this….

I love that he is really getting into Christmas this year though, all the traditions and all of the build up. I’m not quite sure what is better, being the kid who experiences the magic or being the parent who helps bring it all to life for them. Based on my excitement levels already I’m pretty sure it’s the latter :)

Never have I been so terrified to check my emails

Big up to all of the temporary football hooligans!

Double jabbed since May, none of the main symptoms

Sometimes a pyjama day is more than just OK. It’